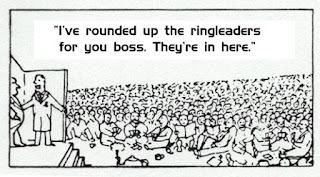 Big Bill Haywood was seated in the Turn Hall headquarters of the Paterson strikers when he was approached by the leading rabbi of the city.:


"Oh, Mr. Haywood, I am so so glad to meet you. I’ve been wanting to meet the leader of the strike for some time."

"You’ve made a mistake," replied Bill, "I’m not the leader."

"There ain’t any He."
"Perhaps I should have said ’they’," persisted the prophet of the Chosen people, "Who are they?"

"This strike has no leaders," answered Bill.

"But can’t I meet some responsible parties elsewhere? You know I represent the other churches of the city, the Catholic Fathers and the Methodist ministers are awaiting my report. I would like to find out all I can and then maybe we could come to some agreement with the mill owners."

"They do! Why some of the leading citizens don’t know yet!"

"That’s funny," smiled Bill, "I just got off a train from Akron a couple of hours ago and I know."

"Will you please tell me?"

"Well, well!" mused the other stroking his rabbinical beard, "I must say it’s strange we had not heard all this!"

"There’s an awful lot of things you never heard of, parson," said Bill.
"Do they have a strike committee, and where do they meet?" continued the rabbi.
"Right in this hall, every morning at eight o’clock."
"Who are they?"

"How many are there?"

"One hundred and twenty-seven."

`"’I don’t reckon that you can do much except the heavy looking on, parson," said Bill. "There ain’t much left in the world for fellows like you to do except that, and besides this is an I. W. W. strike. In an I. W. W. strike there isn’t room for anybody except the working class and the bosses; everybody else is excess baggage."
(Solidarity, April 19, 1913.)
Posted by ajohnstone at Wednesday, May 15, 2013 No comments: