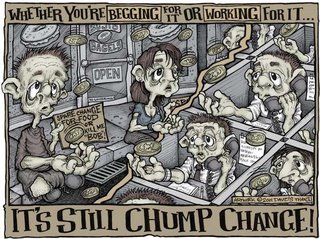 This week, Dupont, the chemical giant, slashed employee pension benefits by two-thirds. Furthermore, new Dupont workers won’t get a guaranteed pension at all — and no health care after retirement. Dupont is not in financial straits. Rather, the slash attack on its workers’ pensions was aimed at adding a crucial three cents a share to company earnings, from $3.11 per share to $3.14. It will more than cover the cost of the company directors’ decision to hike the pension set aside for CEO Charles Holliday to $2.1 million a year.
So Happy Labor Day

And this week, the government made it official: For the first time since the Labor Department began measuring how the American pie is sliced, those in the top fifth of the wealth scale are now gobbling up over half (50.4%) of annual income.
So Happy Labor Day.

While 15.9% of us don’t have health insurance (a record, Mr. President!), even those of us who have it, don’t have it: we’re spending 36% more per family out of pocket on medical costs since the new regime took power in Washington
So Happy Labor Day

USA now has more millionaires than ever — 7.4 million! And over the past decade, the number of billionaires has more than tripled, 341 of them!
So Happy Labor Day

You, Mr. Median, are earning, after inflation, a little less than you earned when Richard Nixon reigned. Median household income — and most of us are “median” — is down. Way down.
Since the Bush Putsch in 2000, median income has fallen 5.9%.
So Happy Labor Day

The richest fifth of America owns 83% of all shares in the stock market. But that’s a bit misleading because most of that, 53% of all the stock, is owned by just one percent of American households

Americans in the bottom fifth have seen their incomes sliced by 20%. Yet , CEO pay at the Fortune 500 has bloated by 51% during the first four years of the Bush regime to an average of $8.1 million per annum
So Happy Labor Day


When Reagan took power in 1980, the One Percent possessed 33% of America’s wealth as measured by capital income. By 2006, the One Percent has swallowed over half of all America’s assets, from sea to shining sea. One hundred fifty million Americans altogether own less than 3% of all private assets.
Happy Labor Day

Edward Wolff, the New York University expert on income, “The middle class is mortgaging itself to death.” As a result of mortgaging our new equity, 60% of all households have seen a decline in net worth.

Output per worker in BushAmerica zoomed by 15% over four years through 2004. Problem is, although worker productivity keeps rising, the producers are getting less and less of it.

SO HAPPY LABOR DAY TO YOU ALL

( Greg Palast also has a quite interesting excerpt from Thom Hartmann’s new book, : Screwed :The Undeclared War Against the Middle Class — and What We Can Do About It.” )

Apologies to any Canadian readers for overlooking that they too celebrate their Labor Day in September and its origins can be traced back to a 1872 printers strike in Toronto .
Posted by ajohnstone at Monday, September 04, 2006

This is a great Blog! But health care costs money.
If you want to supplement your income you need
a simple method. Even with the severest handicap,
you can work at home with a system that is as good
as owning your own ATM Cash Machine!
ATM CASH